Sociologist Alex S. Vitale featured at next Conversations on Race and Policing on Aug. 5

Sociologist Alex S. Vitale featured at next Conversations on Race and Policing on Aug. 5

The guest speaker is an author and professor of sociology at Brooklyn College, and coordinator of the college’s Policing and Social Justice Project. The 10th event in the series hosted by CSUSB students will take place at 4 p.m. on Wednesday, Aug. 5, on Zoom.

Alex S. Vitale, author and professor of sociology at Brooklyn College, coordinator of the college’s Policing and Social Justice Project, and author of “The End of Policing,” will be the guest speaker when Cal State San Bernardino hosts the next Conversations on Race and Policing, 4 p.m. Wednesday, Aug. 5, on Zoom.

Vitale, currently a visiting professor at London Southbank University, has been a much sought-after interview since the topic of defunding police departments has come up in discussions about police reform. The host of the web-based interview series “The Critical Criminologist,” Vitale has spent the last 30 years writing about policing and consults both police departments and human rights organizations internationally.

In addition to “The End of Policing,” he has written “City of Disorder: How the Quality of Life Campaign Transformed New York Politics,” as well as countless articles.

Vitale will be joined by Zachary Powell, CSUSB assistant professor of criminal justice, who will moderate the discussion. He, along with Marc Robinson (assistant professor of history) and Rafik Mohamed (dean of the College of Social and Behavioral Sciences), recently participated in NBC Palm Springs’  three-part interview, “Policing in Black Communities.”

The ongoing Conversations on Race and Policing series, now in its tenth week, is hosted by CSUSB students Marlo Brooks, Kameron Pyant and Yvette Relles-Powell.

Conversations on Race and Policing began in the aftermath of the May 25 death of George Floyd while in the custody of four Minneapolis, Minn., police officers. A video of the incident posted on social media has led to widespread protests, the firing of four police officers, the arrest of one officer on a second-degree murder charge, the other three on charges of aiding and abetting second-degree murder – and a spotlight worldwide on race and policing.

On June 16 the College of Arts and Letters presented “Structural Racism, Civil Disobedience, and the Road to Racial Justice in the Age of COVID-19,” which is also posted on YouTube.

And, related to the university’s conversations series, Netflix is making the 2016 Ava DuVernay film, “13th,” available for free on its YouTube channel. Combining archival footage with testimony from activists and scholars, director Ava DuVernay’s examination of the U.S. prison system looks at how the country’s history of racial inequality drives the high rate of incarceration in America.

For more information, contact Robie Madrigal at rmadriga@csusb.edu or Jeremy Murray at jmurray@csusb.edu. 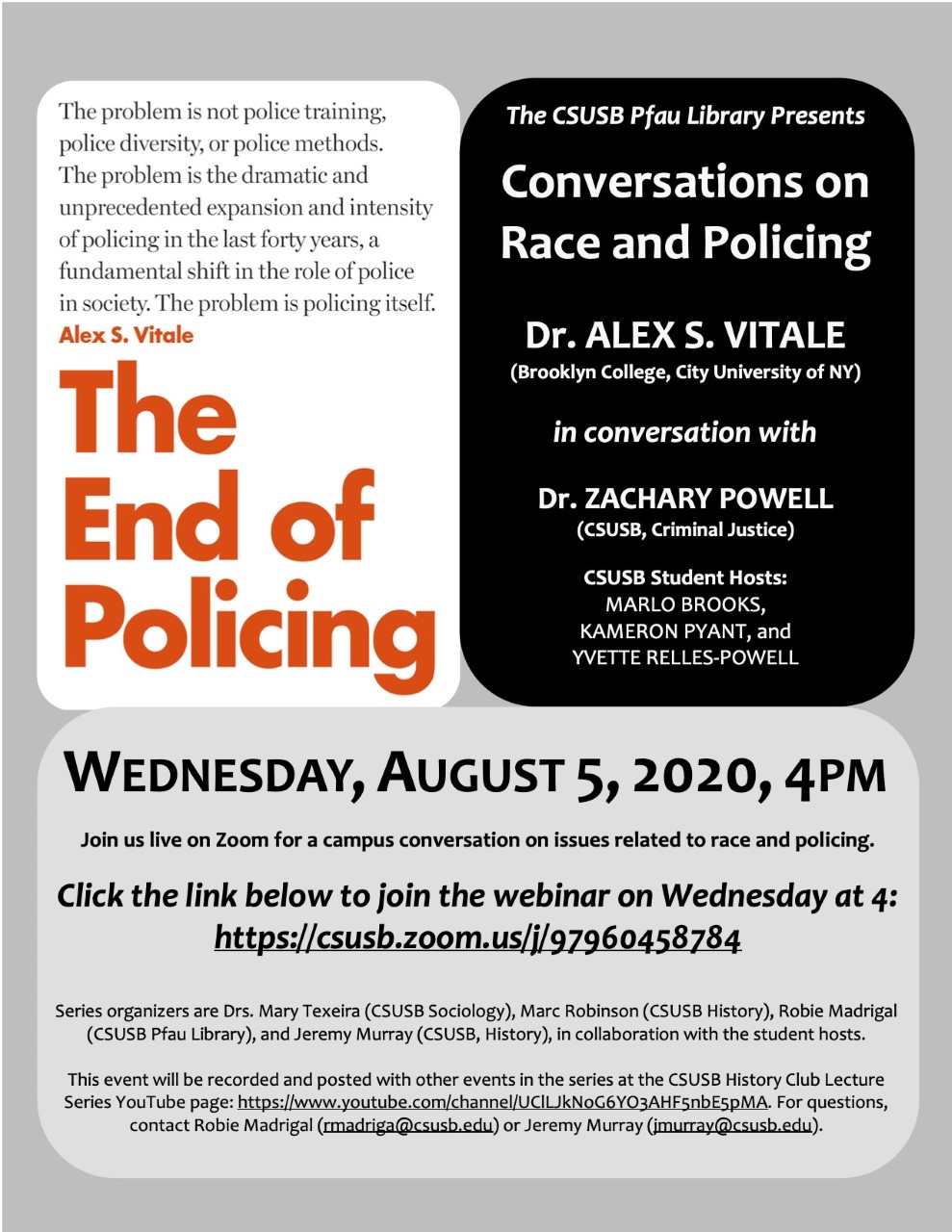